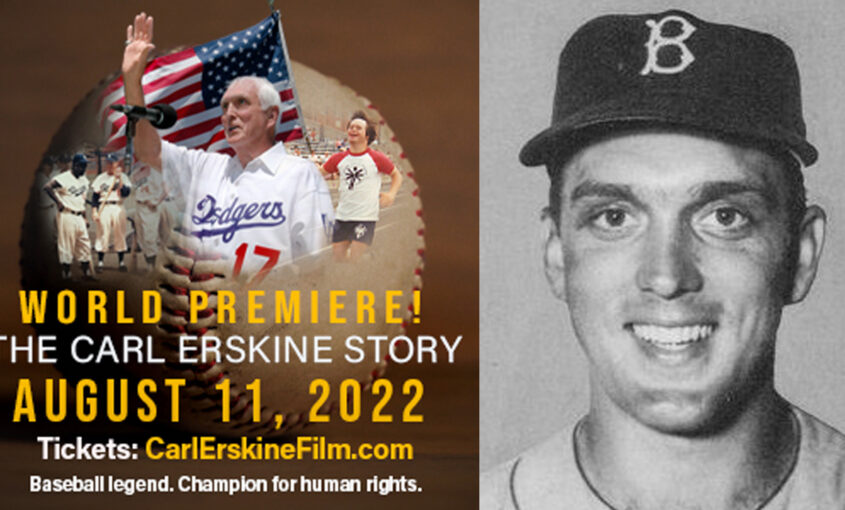 Tickets on sale now at www.carlerskinefilm.com

ANDERSON, Ind. – From the dirt-poor alleys of Anderson, Indiana, to a record-breaking career on the legendary team, on the grandest stage in sports, Carl Erskine has lived the American dream and spent a lifetime giving to others. His life as a famed Brooklyn Dodger and human rights advocate is featured in an inspiring new documentary, “The Best We’ve Got: The Carl Erskine Story,” which will premiere Aug. 11 at the historic Paramount Theatre in downtown Anderson, Indiana.

Tickets for the world premiere are on sale now at www.carlerskinefilm.com.

Directed and produced by award-winning filmmaker Ted Green, the documentary shares the inspiring story of Erskine and the pivotal role he played in two of the great human rights movements of our time. He helped break down racial barriers as a teammate and close friend of Jackie Robinson and fought for people with intellectual disabilities, their acceptance and the services available to them.

“In baseball circles and among many in Indiana, Carl has been revered for decades,” Green said. “And we’ll show that in the most fun, comprehensive light yet. But the true beauty of the film will be what Carl has done, quietly but so powerfully, to integrate society and make all feel accepted and welcome. He is a living testament to the ability a humble, dedicated person has to make a mountain of difference, and the Indiana Historical Society and I are beyond grateful that he’s trusting us with his legacy story.” The film includes commentary and perspectives from the Erskine family, Timothy Shriver of Special Olympics International, Hall of Fame broadcasters Vin Scully and Bob Costas, former Indiana Gov. Mitch Daniels, and Hall of Fame basketball player and coach Bob “Slick” Leonard. Daniels inspired the film’s title. When presenting Erskine with a Sachem Award, the state’s highest honor, he said “He’s the best we’ve got.”

On the human rights front, Erskine and his wife, Betty, raised their son, Jimmy, who has Down’s syndrome, during a time when there was no schooling or services available to him. They started grassroots programs and pushed for legislation that ultimately led to the abolishment of prison-like institutions and steps toward full integration into society.

The project was made possible with the support of the Gaither Charitable Foundation, Avis Foundation, Special Olympics Indiana, Madison County Community Foundation, Ball Brothers Foundation, McMillen Foundation, Peter O’Malley, Mike and Jeannie Dinius, and The Arc of Indiana. The film is being co-produced by Ted Green Films and the Indiana Historical Society. In addition, Special Olympics Indiana is contributing an educational component to the project, the Erskine Personal Impact Curriculum, which will be presented by Duke Energy and distributed to schools statewide. The curriculum’s lessons and activities promote social and emotional learning for every age level, using stories and experiences from Erskine’s life about friendship, dignity, inclusion, perseverance, appreciation, leadership, empowerment, and social change.

Ted Green is a writer, director, and producer who has won 21 regional Emmys, including Best Documentary for his past four films. His most recent film, “Eva: A-7063” about Holocaust survivor Eva Mozes Kor, also was awarded the national Gabriel Award for Human Dignity. He began writing and producing films in 2010 after 20 years as a newspaper journalist.