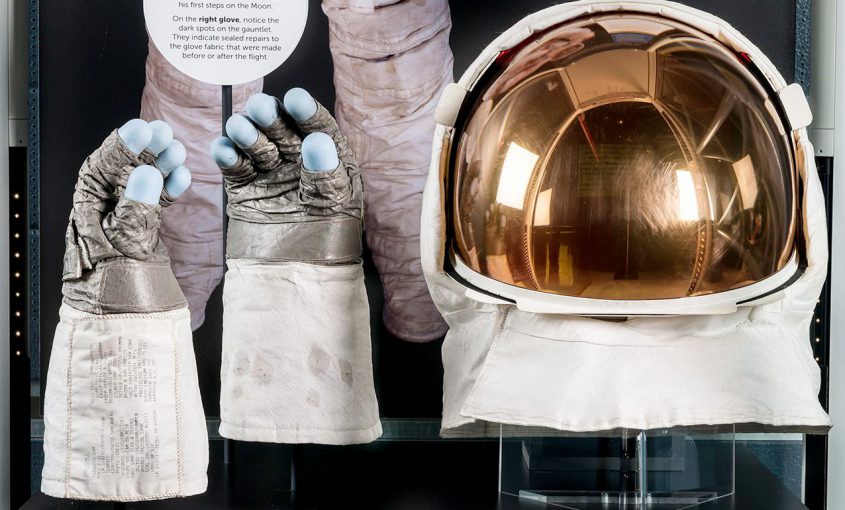 The Smithsonian is commemorating the anniversary of the first moon landing with new exhibits and a virtual display of some of the most historic artifacts from the Apollo 11 mission.

Forty-seven years after astronaut Neil Armstrong became the first human to walk on the moon on July 20, 1969, his lunar-surface-worn gloves and helmet have been put back on display for the first time since 2012. Newly-conserved, they will be on view for one year, beginning on Wednesday (July 20), at the National Air and Space Museum’s Steven F. Udvar-Hazy Center in Chantilly, Virginia.

The Smithsonian is also debuting on Wednesday a high-resolution digital scan of the command module Columbia, the spacecraft that carried Apollo 11 astronauts Armstrong, Buzz Aldrin and Michael Collins to the moon. This detailed model allows anyone with an internet connection to inspect the entire craft, inside and out, as well as download it so it can be 3D printed or explored with VR headsets. [Apollo 11 Moon Landing Pictures | Apollo Missions]

“The opportunity to display these artifacts is rare because of their fragility and the necessity to maintain a controlled environment,” said Cathleen Lewis, a space history curator at the National Air and Space Museum. “We’re excited for the opportunity to show our visitors these components.”

The exhibits coincide with a request by the museum for the public’s photographs of Armstrong’s spacesuit when it was previously displayed. The spacesuit is being conserved as the result of a crowd-funding campaign and the snapshots could help with that effort.

After being used on the moon 47 years ago, Armstrong’s spacesuit and the command module Columbia traveled the country on a 50-state tour beginning in 1970. NASA then transferred the Apollo 11 artifacts to the Smithsonian.

Armstrong’s suit, including the helmet and gloves, was put on display by the Washington institution from 1971 through 2001, first at the Smithsonian American Arts and Industries Building and then at the National Air and Space Museum after it opened 40 years ago this month.

The iconic garment was removed from exhibit in 2001 so that it could be conserved. Though it was built to withstand the extreme environment on the moon, the spacesuit was not designed to survive decades on the Earth. Last year, the museum completed a successful $720,000 Kickstarter campaign to complete the conservation, with the intention of putting the suit back on display by July 2019, the 50th anniversary of the moon landing.

When Armstrong died in August 2012, the National Air and Space Museum briefly displayed the helmet and gloves as a means of giving the public an opportunity to honor and remember the first moonwalker. Now with the conservation mostly complete, the museum has returned them to a case at the Udvar-Hazy Center for the next year.

“Our conservation efforts will continue behind the scenes, but we thought our backers and the public would love to see these objects again while we continue to work towards our 2019 goal of displaying the entire suit in its new display case,” curators wrote to the “Reboot the Suit” supporters.

The Apollo 11 command module, Columbia, was front and center when the National Air and Space Museum opened on July 1, 1976, as part of its Milestones of Flight main hall. Encased in a plexiglass wrap, visitors could peer inside the spacecraft and get a partial view of its interior.

Forty years later, Columbia has now been removed from the Milestones of Flight in preparation for its exhibit in the National Air and Space Museum’s new “Destination Moon” gallery, slated to open in 2020. The new hall, which is also where Armstrong’s spacesuit will be displayed, will tell the story of how the United States went from launching its first astronaut to landing Armstrong and Aldrin on the moon in less than a decade. [Apollo 11 Moon Landing: How It Worked (Infographic)]

The move of the capsule gave its curators the opportunity to digitally scan the craft in unprecedented detail. The museum worked with Autodesk, which developed custom 3D scanning equipment for the project, as well as invented algorithms for integrating multi-sensor data and developed software for processing the massive data set.

As one of the most sophisticated 3D scans ever made of a historic artifact, it employed seven different technologies to capture nearly one trillion measurements, producing more than a terabyte of compressed data resulting in a detailed master model of the command module.

The upshot, beyond the technical achievement, is the first chance for the public — and curators — to explore inside Columbia. The protective covering over the opening of the command module was only removed a few times since the artifact came into the Smithsonian’s collection in 1971.

“Finally, without having to be this librarian that won’t let you read the book because you are afraid you are going to ruin the binding, for the first time you can look as much as you want and explore the entirety of this priceless artifact,” said Allan Needell, Columbia’s curator at the National Air and Space Museum, in an interview. “This is just a thrill to have access without the preservation concerns.”

The digital model is accessible through the Smithsonian X 3D website, which includes a free browser and the ability to download the data for use in modeling programs and to print using a 3D printer. The model will also be featured in the museum’s upcoming “Destination Moon” exhibition.

SNAPSHOTS OF A SPACESUIT

At the same time that the National Air and Space Museum is releasing its new 3D imagery of the command module, it also asking the public to share their personal snapshots.

As part of their conservation and archival efforts, curators are looking for photographs of Neil Armstrong’s Apollo 11 suit from its 1970 national tour, the gloves and helmet on later tours and the spacesuit on display at the Smithsonian between 1971 and 2006.

“With your help our team can better document the repairs we see on the spacesuit and determine a concrete timeline of information regarding the condition of the suit when we start to examine it next,” the museum’s conservators said.

65 Years Ago, Rosa Parks Refused To Give Up Her Bus Seat. Her Arrest Helped Spark The Civil Rights Movement