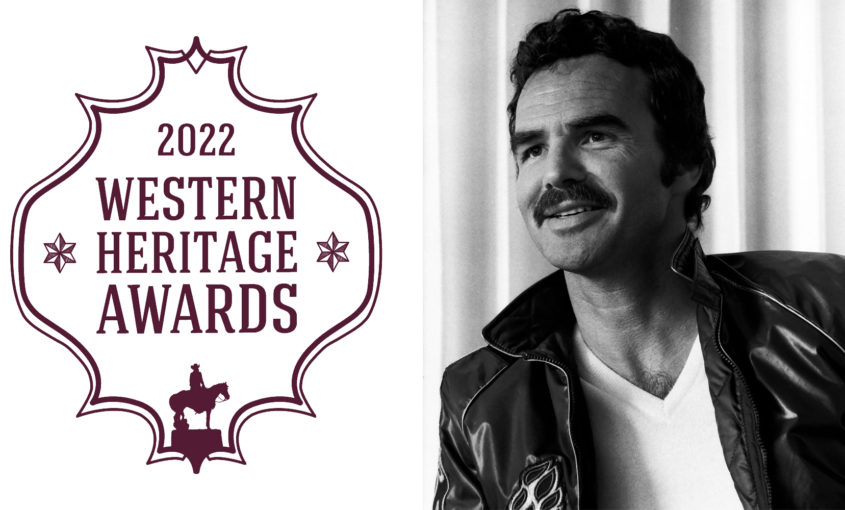 On April 9th, 2022 at the Western Heritage Induction and Awards Ceremony in Oklahoma City Burt Reynolds was inducted into the Hall of Fame Great Western Performers in Film.

Wyatt McCrea, Joel McCrea’s grandson, explains in his interview with Cowboys and Indians Magazine, that the Western Heritage is all about celebrating anything Western and preservation of the West and that Burt is an icon going way back to the days of Gunsmoke.

“The Wrangler” award was presented by Gordon Whitener & Lincoln Lageson, producers of “The Last Movie Star” and members of Western Heritage, who worked with Burt Reynolds on their movie in Tennessee. During the months of filming, they grew to know Burt and were impressed by his amazing horsemanship and movie-related horse stunts, his western portrayals as a Cowboy or an Indian, his love for the American West with its culture and history, and his rescue of Wild Mustangs from out West brought to his Ranch in Jupiter to be cared for.

Newly announced Hall of Great Western Performers honoree Reynolds built a prolific 60-year career as an actor, director and sex symbol. He started with recurring roles on television shows like “Gunsmoke,” “Riverboat” and “Hawk,” and by the 1960s, the Michigan native was earning multiple roles in Western films and TV series. By the 1980s, he was a bona fide movie star, and he earned a 1998 Oscar nomination for his supporting role in Paul Thomas Anderson’s “Boogie Nights.” Reynolds played memorable roles in a multitude of movies, including “Smokey and the Bandit,” “Deliverance,” “Navajo Joe,” “100 Rifles” and “Sam Whiskey.”

An Andre The Giant Documentary Is Coming, Thanks To HBO And Bill Simmons