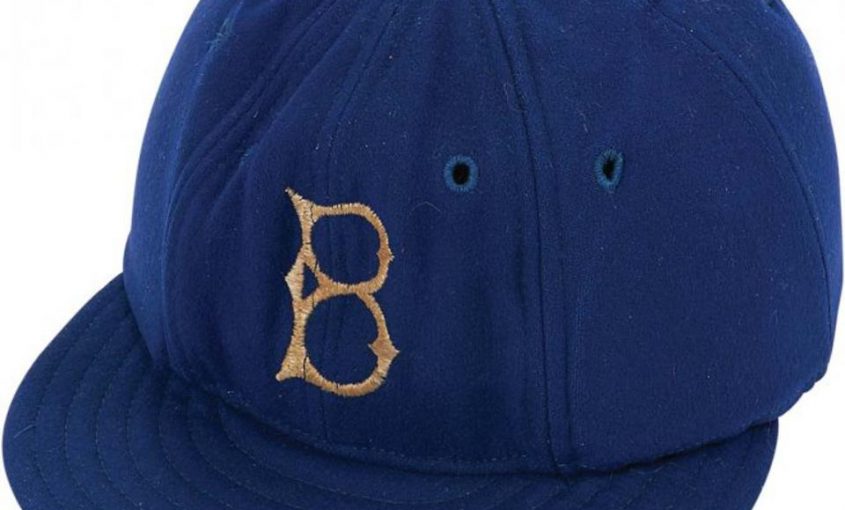 “So much more than a baseball cap, this rates as one of the most profound pieces of sports history that has ever been offered for public sale,”declares Lelands, a top, New York auction house. “One of the true Holy Grails of the sports collecting hobby has had only two owners since the Robinson Family.”

Made before the advent of batting helmets, the custom wool cap that the Brooklyn Dodgers’Jackie Robinson wore in his rookie year and in the following season to shield himself from violent opponents is up for auction. On the first day, it rocketed to $65,550.

The lot includes a letter from his wife, Rachel Robinson, stating that “the cap has three protective plates sewn inside the lining to protect his head from beanings.” Jackie Robinson was, of course, the first black to break the so-called color line in 1947.

In the racially-charged era of segregation when “separate” was deemed “equal,”Robinson joined the Dodgers. At the ballpark, head hunters on opposing pitching staffs posed a mortal threat.

“Baseball fans and players reacted to Robinson with everything from unbridled enthusiasm evident in newspaper headlines, to wariness and open hostility expressed in beanball pitches and death threats,” says the Library of Congress.

“Jackie Robinson gave his life for something great; heroes do,” wrote NPR’s Scott Simon in his book Jackie Robinson and The Integration of Baseball. “He chose to bear the daily, bloody trial of standing up to beanballs and cleats launched into his shins, chest, and chin, and the race-baiting taunts raining down from the stands, along with trash, tomatoes, rocks, watermelon slices, and Sambo dolls. And then he performed with eloquent achievement and superlative poise.”

Robinson even had to wear his special cap while running the bases. “One reserve player for the Pirates reported that infielders received an automatic fine if they didn’t try to bean Robinson on a double play,”according to the Pittsburgh Post Gazette.

Robinson’s remarkable self-restraint during his rookie year is the stuff of legend. He and the Brooklyn Dodgers President Branch Rickey had a pivotal conversation before Robinson’s signing. “I’m looking for a ballplayer with guts enough not to fight back.”Rickey famously said.

Robinson won Rookie of the Year in his first season, batting .297 with 12 homers and 29 stolen bases. Two years later he was the National League’s Most Valuable Player en route to the Hall of Fame.

“After a few seasons of playing well while tolerating racial insults, Robinson stepped up his playing style and spoke out often,” the Library of Congress adds. “He stirred controversy by protesting — umpires’ calls, hotels that refused to let him stay with his teammates, and teams that refused to hire black players.”

In 1952 while overseeing the Pirates, Rickey invented the batting helmet, obviating the need for Robinson to continue wearing his necessary, short-lived invention. But Robinson still remained in danger. In a 1961 Sports Illustrated article titled Baseball’s Secret Weapon: Terror, Roger Kahn–who covered the Brooklyn Dodgers and immortalized them in his classic Boys of Summer–recalled that one of Robinson’s hard-shelled batting helmets was actually “fractured” from an explosive pitch.

An Andre The Giant Documentary Is Coming, Thanks To HBO And Bill Simmons